The historic stone: it is a 4000-year old monolith adorned with graffiti and located in the gardens of Palazzo Corte Salvi. 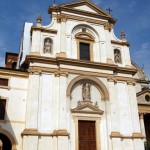 Parish church of Saint Blaise (Antica Parrocchiale di Sant Biagio): this church, started in the 12th  century and completed in the 18th  century, is located in the main squre. At the beginning it was the oratory of the neighbouring Bishop’s Palace and at the end of the 13th century the bishop donated it to the commune of Bovolone to make a new church. The antiquity of the building is confirmed by the frescoes of the back wall of the façade. 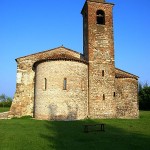 Old church of Saint John the Baptist in the Country (Antica Pieve di San Giovanni Battista in Campagna), 8th century: the architectural complex, located in Contrada San Giovanni, has recently been restored to its former splendor. It consists of a basilica and of an octagonal baptistery. The beautiful frescoes of the latter date back to the 16th century and show St. John the Baptist’s life and martyrdom. In the six upper lunettes they show the Passion of Christ. In the presbytery, erected in 1792, the paintings represent the four evangelists with Moses and Elijah, and in altar lunette the Birth of the Virgin. In the basilica other frescoes in the small apse on the left date from the 14th century and show the Madonna nursing the infant Jesus, Christ in throne with a scroll in his hand, two saints (one of whom probably St. Agatha Martyr near a piece of a crucifixion). The old church is unique in a country setting.

Oratory of San Pietro: even though very old, the first records about this building date from 1454. The chapel, located in Contrada San Pietrino, was built on the estate of the Pieve of Bovolone. Later it became the property of the noble Venetian family of the Counts Capello, who transformed it in their private church. 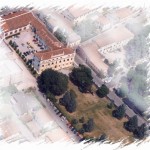 The Bishop’s Palace: the estates of the Bishop of Verona at Bovolone date back at least to the 8th  century and were later confirmed by popes and emperors. The palace was considerable restored between 1790 and 1805 for want of Bishop Giovanni Andrea Avogadro. He ordered to pull down the towers and the battlements, and the building became more imposing, taller and longer than the original one.

Museum of furniture styles (Museo “Percorso degli stili del mobile”): it presents pieces of furniture made by the students of the Fine Woodworking School in the shapes and with the ancient methods of a broad time range from 1400 to 1900.