The small town of Francolise lies North-West of Caserta and has a population of about 5,000 inhabitants and covers an area of 44 square km, mainly in the plane and along the Appia Road. Francolise belongs to the towns declared GMO-free and it is economy is mainly rural. It is renowned for its olive groves which draw their origin from the Roman conquest. The archeological and artistic patrimony of this small town is remarkable and it includes a large necropolis of the 4th century, two Roman villas dating from the golden age of the Republic of Rome, two frescoed churches of the 12th and 13th century, a Romanesque church with a School of Giotto altarpiece, one of the oldest Norman castles of the Province of Caserta and a great baronial palace.

Tobacco is the irreplaceable engine of the local economy. The production is marked by very high quality in all the territory. In 2008 the first National Fair of Tobacco welcomed the presence of large numbers of aficionados and experts at Sant’Andrea del Pizzone, a suburb of Francolise. The arrival of so many people from every part of Italy and abroad to visit the stands, the exhibitions, the congress and other events transformed Francolise in a true tobacco town.

NOMISMA “THE SOCIO-ECONOMIC VALUE OF RAW TOBACCO IN THE EU” 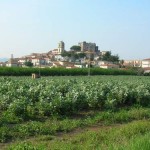