In his Naturalis Historia Pliny the Elder calls the area between the consular roads which connected Cuma, Pozzuoli and Capua “Campi Leborini”, from the name of the local inhabitants, the Leborini. This area, which was inhabited by the Ausons since the Bronze Age, included also the present Province of Caserta and was called “Terra di Lavoro”, one of the most fertile areas of Southern Italy. Many authors of the time defined it as a ture “Campania Felix” (happy land). From the administrative point of view, Emperor Frederick the 2nd of Swabia gave autonomy to this territory in 1221: the region quickly expanded to cover also the present provinces of Naples, Avellino, Latina, Frosinone, Benevento until Capriati al Volturno in what is now Molise. Seven hundred years of administrative unity were however cancelled by the decree-law of 2 January 1927 by which the Mussolini Government abolished the Province Terra di Lavoro (the main town of which was Caserta) and pushed back the border of Campania to the river Garigliano. The municipalities north of the river were annexed to the newly created province of Latina, while the municipalities of the Prefectorate of Piedimonte Matese passed under Benevento together with seven other municipalities of the Province of Campobasso. The fascist regime created 17 new provinces in Italy and cancelled a very ancient and noble one: Terra di Lavoro, which boasted 5,269 square km and a population of 867,826 inhabitants living in 192 municipalities. 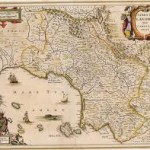 In the frescoes of some patrician villas of the Vesuvian towns of Pompeii and Herculaneum it is possible to see the same fruits and the same vegetables that until a few years ago the Campanian housewives bought at the market and used for cooking as fundamental ingredients of the renowned Mediterranean diet. But in the last 30 years new eating habits and a twisted perception of “the good and the beautiful” by most consumers, who pay more attention to the appearance of what they eat rather than to the content, have relegated centuries-old traditional food resources and eating habits to increasingly marginal places. In these years the demographic growth and scientific research have imposed new production models also in agriculture, paying more attention to revenues than to quality.

At last today consumers are more aware of the importance of correct eating habits, and this, coupled to a renewed interest for the traditions of their land and to a growing attention to the issues of food security and the protection of the environment, has brought the agricultural patrimony of this territory back into the limelight.

Today the ancient Terra di Lavoro is an area which belongs more to history than to geography. However the Upper Province of Caserta still is one of the most fertile areas of Campania. The fertility of the soils, especially of the hilly ones, is a result of the eruptions and the lava flows of the Massif of Roccamonfina in the Pleistocene. They created the ideal conditions for the cultivation not only of cereals, legumes and vegetables, but also of chestnuts, vines. Olives. There also are volcanic waters which flow from oligo-element rich springs in the small towns of Sessa Aurunca, Suio, Francolise and Teano. 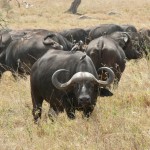 Buffalo breeding: Buffalo and cattle breeding finds excellent conditions in the area, and the buffalo milk mozzarella which is produced between Capua and the Lower Volturno Valley achieves peaks of excellence.

All sort of legumes take a primary role in the cuisine of the Upper Province of Caserta, either on their own just out of the pod, or with pasta in nutritious soups. Among other vegetables, the braised rapini with lots of garlic and chili become the delicious “friarelli”. Eggplants, peppers and tomatoes, which belong to the Solanaceae family together with tobacco, have taken root here for centuries. Eggplants, layered with mozzarella, grated sheep’s milk cheese and tomato sauce, are the basis of “Parmigiana”, while the valuable variety of bell peppers “Quadro di Francolise” reach the table either in a sour-sweet preparation or quartered and filled with breadcrumbs, anchovies and capers.

Also the cultivation of hunch-backed cardoons is very traditional, and these tender vegetables are the basis of a nutritious velvety soup. This is a cuisine based on very simple ingredients which mirrors the social fabric of this land which never mixed with the richness of the royal court, even if the latter was based not far away in the Royal Palace of Caserta. 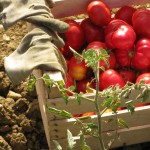 Meat seldom appears on the table here. It is sold fresh as soon as slaughtered: it therefore needs those long cooking times which brought to fame dishes such as “ragù” (minced meat cooked in a rich tomato sauce), “Genovese” (a pasta sauce which involves the very slow braining of onions and meat) or “braciole ‘mbuttunate” (stuffed lamb cutlets). Meat is normally processed and mixed with vegetables, oregano, garlic and chili. In the last years buffalo meat has met commercial success and its use is spreading as an elite alternative to traditional beef meat.

The tomatoes of the Province of Caserta: Tomatoes are always present on the table. The local production is of excellent quality and very fragrant. The Caserta canning industry has exported peeled tomatoes and concentrated tomato sauce everywhere in the world. All household in the country and in town maintain the tradition of preserving large amounts to use in cooking during the year. So we find bottled tomatoes, either cubed or pureed, ready for use in different concoctions, or the famous “conserva” where tomatoes are cooked for hours to become a thick velvety sauce. Fresh, juicy tomatoes can be eaten off the plant or can be sliced over a pizza so that their taste joins that of mozzarella and anchovies in a perfect fusion.

Fish is kept for great celebrations, and it is cooked also with vegetables in the oven. Also the first courses are often mixed with vegetables, but there are also anchovy-based sauces which are flavoured with garlic, parsley and chili.

Among the desserts, besides ice-cream and “cassata”, it is important to mention the renowned Annurca apple which is very popular in the Province of Caserta. It is a white-fleshed apple with a sweet slightly acidic taste, full of flavour and fragrance.

Wine Pallagrello, Casavecchia and Asprinio are the most important indigenous grape varieties of the area.

Pallagrello represents one of the few cases of grape variety which offers both white and red grapes, and it was appreciated and enhanced by King Ferdinand the 4th of Bourbon who ordered that a large quantity of these vines be planted in his vineyard “Vigna del Ventaglio”.

Casavecchia derives its name from the fact that a plant, which had miraculously survived the dreadful wine blight (phylloxera) epidemic of the mid-19th century, was found alive and bearing fruit among the ruins of an old Roman house. It seems that Casavecchia was indeed the grape which produced the famous “trebulanum”, one of the preferred wines by the Romans.

Asprinio is a white grape variety whose bunches grow on cordons which climb poplar trees up to 15 m from the ground: it gives a white wine with a slight citrus taste, sour and refreshing. 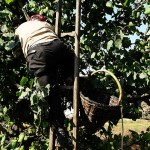 Lastly, it is important to mention Galluccio, a DOC wine (controlled designation of origin) which is obtained from the red grape variety Aglianico and the white grape variety Falanghina. Both varieties grow on the slopes of the Roccamonfina volcano: the lavic soil gives the grapes a magnificent fragrance and body.

The most well-known of all the wines in ancient times was Falerno which is even nowadays produced in the Province of Caserta. In the Roman times it was only a dark wine which was described as strong and lasting well and, if young, so sour that it was impossible to drink. It was good only after several years of ageing. The Roman poet Horace called him “fire wine” and another Roman poet, Persius, called it “indomitable”. It was requested that its ageing time should be 10-20 years. Horace speaks of a Falerno which was produced in his vineyard which was 33-year old like himself. On the other hand the Roman philosopher and orator Cicero said that letting Falerno age too long would make it undrinkable. According to many scientists who have tried to compare it with present time wines, Falerno must have been like sherry with a dark straw colour and not like the present red wine bearing the same name.There were two types, a dry one and a semi-sweet one. The latter was obtained really by chance according to the climatic conditions of the season: if during vintage wind kept blowing from the South, the grapes would become too dry and their sugar content would increase. 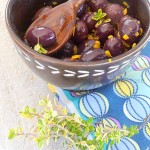 This part of the area around Caserta is the cradle of the Gaeta olive, a variety of black olive which undergoes a special processing and becomes one of the most mouth-watering products on the Italian tables. Olive oil was a fundamental ingredient of food in the Roman times and also was used for other purposes such as medicine, cosmetics and lighting.

There were different types of oil: the best was virgin oil or first pressing “oleum flos” which was very expensive. The second quality oil, “oleum sequens” was cheaper; there was also a low quality type called “oleum cibarium”. The name “oleum flos” was often use for the oil coming from the area of Aurunca, a small town near Caserta, and its surroundings. At Francolise there are findings of olive processing dating from the late years of the Roman republic (50 BC to 50 AD): traces of a plant for olive pressing were found in an old Roman villa.

Olive oil was used for centuries as a means to preserve any vegetable: peppers, eggplants, courgettes, tomatoes, artichokes…. These preserves allowed prolong the availability of seasonal products during the entire year. In the area with the highest air humidity, olive oil was and is still used also for ripening high-quality cheese, hams and salami which were greatly appreciated both in the past and nowadays. The extra-virgin olive oil “Terre Aurunche” is obtained by pressing olives which must comprise at least 70% of the Sessana cultivar.