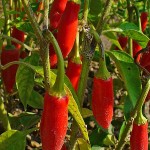 From the botanical point of view tobacco belongs to the Solanaceae family together which other plants which are very well-known and very much loved either for food use, such as tomatoes, eggplants, potatoes, peppers, paprika, physalis (Cape gooseberry), or for ornamental use such as petunia and datura (and tobacco is also an excellent garden plant!), or for pharmaceutical purposes, such as belladonna for atropine and scopolamine.

Even if tobacco is useful for several other purposes (see “Alternative tobacco”) which researchers are very active on, tobacco distinguishes itself by the emotion which tobacco-control organizations use in attacking not only smoking products, but also the crop itself. These emotional attacks very often manipulate the agricultural reality and often misrepresent information providing wrong data without supplying any precise reference.

It is often said that tobacco is harmful to the environment as it needs a higher use of crop protection agents than other crops. This is not correct. Even if there are no comparative studies on various crops, there are indeed several databases, among which the one of the US Department of Agriculture. From these databases  it is clear that the total use of crop protection agents per hectare on tobacco is much lower than on other major crops such as strawberries, citrus fruit, apples, potatoes and carrots, just to name a few.

Another source of information are the labels of crop protection agents. Since these products generally are dangerous products, they are subjected to a set of regulations among the strictest in the world. Both the active substance and the formulated product must be registered by the competent authorities before they can be produced, sold and used in a given country. The registration of pesticides is the process by which the competent authorities (normally the Ministry of Health, or the Ministry of Agriculture, or a specialized pesticide agency) examine the active substance and the formulated product, the crop and the proposed rates of use, the frequency and the timing of the applications, the mode of storage and of disposal. The authorities, with this assessment, must guarantee that the product does not have a negative impact on man and the environment.

The decisions of the national authorities are based on the deep examination of a very long list of studies which are requested by law and are decided at international level. The producer of crop protection agents cannot obtain the licence to produce, sell and recommend their products if they have not subjected all the requested studies to the national authorities. The completion of the studies lasts at least five years and the process of registration normally two years.

When the authorities grant the licence of use of a product in the form of registration decree, the government normally publishes on the Official Journal the label of the registered product or at least all the information relative to its use on all the crops. It is therefore very easy to compare all the registered crops their rates of use. The analysis of the labels of many important countries has shown that the amount of crop protection agents used on tobacco is in line, if not lower, with the rates used on many other crops.

The use of pesticides in tobacco growing

It is often said that tobacco depletes the soil as it consumes the soil nutrients much more rapidly than other crops. It is difficult to make such a statement, since there are no comparative studies on the fertilizer needs of different crops, since these change considerably depending on a wide range of parameters, including soil itself, crop rotation, clime, etc. The main nutritional elements for plants are nitrogen, phosphorus and potassium: different crops need them in different measures and it is difficult to say that a crop which needs more nitrogen than phosphorus or potassium is more harmful to the environment that one that needs more potassium than nitrogen or phosphorus.

Use of wood for curing

A specific aspect of tobacco is that it needs drying to achieve the organoleptic characteristics which are appreciated by customers. According to varieties the drying process can take place under the sun, as it happens in Greece, Bulgaria, Macedonia or Turkey for oriental tobacco. It can also take place by air in special sheds as in the case of Burley tobacco. It can also need curing by fire as in the case of Kentucky tobacco or in special barns provided with a furnace which in some countries are fuelled by wood.

Organizations which aim at control or total elimination of tobacco maintain that tobacco is one of the major sources of deforestation for the continuous increase of areas grown with tobacco and also for the use of wood for curing. This is not correct.

The data of the FAO (the United Nations organization on food and agriculture) demonstrate that tobacco represents less than 0.1% of the cultivated lands at world level. The surface grown with tobacco at world level is decreasing, and it has dropped by 15% in the last 20 years. Even if in a small group of producing countries the surface grown with tobacco has increased, the increase of the surface under tobacco has always been much smaller than the increase of other crops such as soybean, maize, rice, pulses, potato, rubber, palm oil.

Where the use of wood is concerned in Europe flue-cured Virginia tobacco, which is dried by artificial heat, relies on methane gas or on bio-mass to fuel the barns, and studies to exploit solar energy are also undergoing. The burley sheds are all built with bricks and metal rafters. With regard to the very small production of fire cured tobacco, it is normally supplied by the Department of Forests. Check that this is true also for Spain and Poland.

The concern is bigger for some developing countries where wood is the main source of energy, in the lack of electricity or alternative fuels, and is also one of the main building materials. The attached study, basing itself on information on public data totally independent from tobacco companies, shows that the problem of deforestation linked to tobacco production exists only in very few countries and also that that tobacco companies undertake activities to minimize the impact of curing both by improving the drying facilities and by undertaking reforestation projects.

The impact of tobacco growing on deforestation