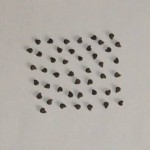 Tobacco seeds are minute, smaller than the head of a pin. A gram of seeds contains about 10,000 seeds. In order to achieve a uniform production, the seeds are planted in special seedbeds. The system currently used in Europe and in the United States involves the use of seeding trays filled with a special growing medium. The trays are placed in shallow containers called “float beds” which contain water mixed to fertilizers. Transplanting occurs when the small plants have developed 6-7 leaves. Distance of the plants at transplant depends on the type of tobacco, the soil and climate of the area. 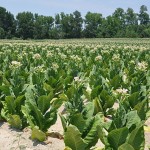 Once it has been transplanted the plants receive the usual attentions of crops, such as the appropriate dose of fertilizers and the monitoring of weeds, harmful insects and diseases. When the plant starts producing flowers, the flower head is removed and later the axillary suckers developing at the nodes of the culm are removed. These practices aim to increase the weight of the leaves as the nutrients are used for the development of leaves rather than for the production of the seeds. The reaping of leaves, which can occur one by one or as a whole plant or a mix of both practices, is carried out when the leaves have reached the correct level of ripening.

The curing and subsequent seasoning allow a slow oxidizing process and the reduction of carotenoids in the tobacco leaves. This process allows the development of the aromatic compounds of the leaf and is similar to the drying process of coffee or tea. The starches of the leaf are transformed in sugars which cause the glycation of the proteins and by oxidizing they become in turn aromatic products which add more taste to the product. The different types of curing (in barns with a furnace for Virginia tobacco, with direct fire for Havana or Paraguay tobacco, by air in the shade for Burley tobacco and in the sun for oriental tobaccos) has a different length which depends on the temperature which is clearly higher in the barns with a furnace or with direct fire. The different temperature also causes a different level of transformation from starch into sugar and therefore imparts a different taste to tobacco.Once they are dry, the leaves are tied in bunches according to the color and the position on the plant and are packed to be sold to the first processors.

The companies which do the first processing of tobacco remove the foreign matter which can be accidentally mixed with leaves during packing on farms and thresh the leaves to remove the hard mid-rib. The mid-rib is very hard and its shreds would pierce holes in the cigarette papers or in the delicate wrapper leaf of cigars, and it may also impact the taste of tobacco products. The first processors then grade the leaves and pack them ready for shipment to the various manufacturers of finished products. Once packed, tobacco may remain in a warehouse for several months without changing its organoleptic characteristics. All these operations require a high level of labour: first processing represents a very important form of employment in the agro-processing sector.