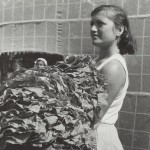 Tobacco processing and manufacture was nearly exclusively a woman’s task because women are more skilled and precise and pay more attention to colour, but also because the salary for a woman was normally 20% lower than a man even with the same level of qualifications. After World War II and in the first years of the ‘50s the low membership in trade unions contributed to the high employment of women in tobacco: the families of sharecroppers and labourers ensured the presence of low-cost female labour.

The family income was based on the whole family work in the fields during Summer, from transplant to harvest. During Winter the men were busy with leaf curing and the preparation of the seedbeds for the next crop, and the women worked in the tobacco factories.

The women working in tobacco also gave a great contribution to social development as they fought for their rights and received the first benefits for their work obtaining the creation of the first nurseries, medical assistance at work and better working conditions.